It is with the utmost importance that you read this full and unbiased review regarding the new Zero Loss Formula Scam that has just been released. Ano, we are calling this sad excuse of an auto trader a scam straight up, as they have already caused some of our subscribers to lose some of their money, and that is something we never take lightly, no matter what. If you have received any emails leading you to the ZeroLossFormula.com webové stránky, we advise you to unsubscribe from that list at your earliest available time, and ensure you read this full review on the Zero Loss Formula Scam in order to understand why this system is not worth investing into.

Peter Morgan the so called owner of the Zero Loss Formula software is nothing but a paid actor who clearly has no conscious. As most of you know we are not entirely against systems using actors to present a software. However what we are against is the same actors being used in various scam systems that have already been exposed, leading us to believe that it is actually the same scammers behind each launch. The reason we are saying all of this, is purely because our actor Mr. Morgan can also be seen in our Hedge Formula Group scam review. Plus who wants to believe someone who even claims to be someone else in a private jet (i.e we are talking about the fact that there is a dude with hair getting into the jet, and as you can clearly see Peter Morgan does not have hair)

Deceptive Pop-up used to capture your email for near future spamming! 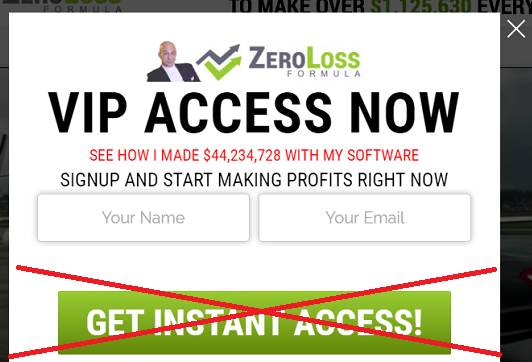 So you are probably thinking this is all good and well, the advertisers behind the Zero Loss Formula scam used an actor, and paid for a private jet to shoot the video, maybe just maybe they are still legit. The sad truth is that there will still be traders thinking along those lines, and we hate to be the bearer of bad news, but this most certainly is not the case. There are quite a few more facts that proves without a doubt that the zero loss formula software is nothing put a thrown together low budget fraudulent system. To prove this we will exposing some more damning evidence that we have found.

We are sure you all noticed the so called lovely testimonials and reviews on how the software has made a few people some great sums of money. The heartbreakingly truth is that these performances are all paid for and can be found on a website called fiverr.com. These actors are kind of becoming celebrities in the binary options industry, purely for the sheer amount of times they have been paid to lie for scam systems such as the Zero Loss Formula software. They will practically say anything you want them to say for a small amount of money.

Another couple of facts that we found also proves to us without a doubt that the Zero Loss Formula software is a scam and nothing else. Peter Morgan claims to be the CEO of a company by the name of Zero Loss Holdings, who are of course the owner of the auto trader. When you try to search for the company name or any type of registrations regarding the start-up of the establishment, there is no information available. There is no documentations anywhere, or a company registration number, nothing proving that such a company exists, which of course proves to us that they donâ€™t, and it is all a lie. Which also leads us to our next point which is the age of the company / ZeroLossFormula.com website. During the presentation for the Zero Loss Formula scam you can clearly hear Peter say that the system has not had any losing trades in the past two years, implying that they have been around for a little while at least. Well we already proved to you that the company does not exist, how about just the website then? We wish we had better news, but we donâ€™t, going on the reliability of who.is, which is the one of the most trusted and well known websites for checking domain details, we came to realise that the Zero Loss Formula scam was only registered on the 2nd July 2016, making it less than 2 months old. Therefore confirming once again that we are being lied to throughout the whole of the pitch video. Given all the facts in this review, is there really any need to continue?

Other factors of course also confirms that the Zero Loss Formula software is a scam, and that our review is spot on, and that are the following claims, that cannot be true no matter how you want to spin them, they areâ€¦.Being able to profit between $200 k $800 on each trade (nope cannot be true, especially not on a deposit of $250), making $8k per day, trading taking place 24/7, last release before the system is transformed into a hedge fund, and being sold off for no less than $10 milionů.

Those that have been in the binary options industry for a little while will know that the above mentioned statements are nothing fabricated lies to make them sound like they know what they are talking about. Take the 24/7 trades for example, here is no trading on weekends, and so therefore trades being executed on weekends is impossible. All of this is very important when you get to the final decision to invest money into any signal service. It is becoming more crucial that you read as many reviews as possible before coming to any conclusions, as chances are you are dealing with a scam, as 95% of them are, and knowing which ones can be trusted will make the difference between you profiting or losing.

The above reviews are details and expose the fraud sites in details.

Pro pomoc s spory, complaints and all other questions you may contact us directly at [email protected] and we’ll gladly assist you at zero cost. Our goal is to help deter online-traders from potential money traps such as ZeroLossFormula.com and other fake sites that we listed on our Blacklist page. We strongly encourage you to visit Hlídací pes je Testován Signály pro binární možnosti, for better alternatives. We endorse manual and automated services with a proven ITM performance over time, and we are very strict with our testing and over all feedback provided to us by other users.

Proven and Tested by BinaryOptionsWATCHDOG.trade