Dårlig Aristoteles Onassis er sannsynligvis snu seg i sin grav… The Onassis Alliance system is one of the newest Auto Trading scam sites to hit the market. Den OnassisAlliance.co promotional videos uploaded to YouTube on November 5th just a few days prior to this review, serving as living proof to the fact that scammers never sleep. They continuously churn out “wildly profitable” trading deals for everyday people, which guarantee them millions upon millions of dollars, without allegedly wanting anything in return.

Why would someone name a scam auto-trader after a long deceased Greek shipping tycoon though? To conjure subconscious images of wealth in the minds of those reading about it? At this point, it is safe to say the public at large – especially the category most prone to falling victim to such scams – no longer knows about Mr. Onassis…he did pass away in 1975 after all. Fortsatt, he must have descendants, so there could be an extra lawsuit in this, provided the perpetrators of the disgraceful Onassis Alliance scam are ever apprehended.

Do you really believe you can make $600+ an hour? Continue reading this review and find out! There’s a decent lead to start off on in this respect too: the person in the video, who claims to be Jed Onassis. The second we caught glimpse of him, we recognized him. Du ser, this isn’t the first such scam Mr. Onassis has been seen to promote. There was another one, featuring him on a yacht, in which he also claimed to be able to run laps around Wall Street and their trading technology , with software off his laptop.

Mr. Scam Artist from the alleged Onassis Alliance, don’t be fooled by his acting skills. 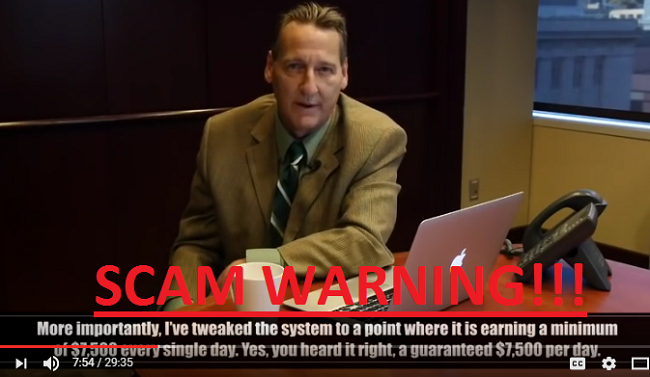 Technology-wise, he doesn’t go into many details: he has some super trading algorithms working for him, coupled with super fast data transfer and reaction-times. He has a system that places counter-trades on trades that are about to go sour…we’ve heard all this before and not once or twice either. Those who know their trading and how brokers work, know that there is no such thing as placing counter trades and breaking even. It’s a mathematical impossibility on account of the return rates involved. Videre, the whole “faster than greased lightning” angle has been over-abused by now!

For help with disputes, complaints and other matters concerning potential scams, we invite you to contact us directly at [email protected] and weâ€™ll be happy to assist you free of charge. We also create a page, listing all the scam sites we exposed in the last years and, the Blacklist is located at the top menu of our site.