Gerisi ondan sonra bu yorumunu okumayı sağlamak, olacak 100% Brexit Bot sadece bir aldatmaca olduğuna ikna! Most of our subscribers will remember a launch that appeared not too long ago called the Brexit Money Machine, and at the time we were not at all surprised by the name and the claims of the auto trader. However saying that, the sad thing is, not only has someone made unrealistic claims once, they have only gone and done it twice. We encourage you to read our full review in order to understand why the Brexit Bot is a scam service that cannot be trusted, and why it will be beneficial to your bank account to not make any deposits on the Brexitbot.com web sitesi.

auto trading system that will take advantage of one of the biggest economic events ever to take place, the Brexit referendum. He supposedly realised that the event will create constant fluctuations in the GBP, proving great opportunities for trading, and profiting whilst trading all döviz çiftleri

When you think about the whole idea behind the Brexit Bot scam auto trader, think for yourself, does it make any sense? Well in our view, no it does not. In order to trade all GBP döviz çiftleri 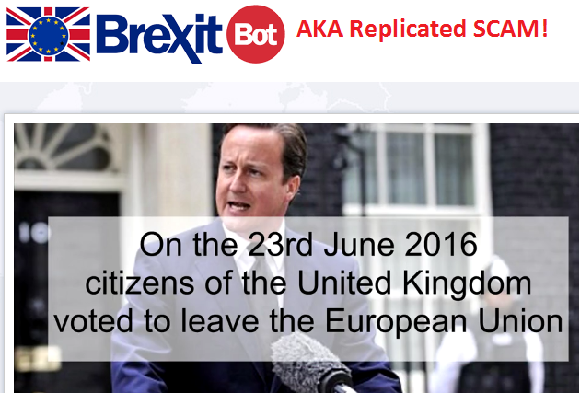 Here are a few facts that prove without a doubt that the Brexit Bot Software is a scam, and cannot be trusted. First of all Mr. Harrison makes a big show about bagging himself a staggering profit of no less than $1.2 Million in 6 weeks, since the referendum decision was made. This is all a bogus claim, because if you go and have a look on who.is you will see that the Brexitbot.com webpage was only registered on the 21st July 2016, making it less than one months old, meaning it is not even 4 weeks old yet, how can he then claim that it has been around for at least six weeks. Another very big lie that he so casually throws into the presentation is the fact that each trader will supposedly be able to generate no less than $180K per week. The sad thing is that new traders in the ikili seçenekleri

Scams such as the Brexit Bot auto trader are on the rise, and people are coming up with more and more ridiculous systems and offers to catch the newest members to ikili seçenekleri

ticaret, and sadly it will not end until traders stop registering for the scam services out there. We encourage everyone to read reviews and do your research, as there truly are trusted systems out there, it is just a matter of going through the haystack to find the one that works. Our goal for running this site and doing what we do, is to make it easier for you not to fall for scam systems such as the Brexit Bot software. Therefore we ask if you know of anyone who has been looking at the Brexit Bot scam, or are about to register, to share this review with them, save them money.

For help with complaints, disputes and other issues with brokers or signals services you may email us directly at [email protected] and we’ll gladly assist you at no cost. Be sure to leave a comment below if you have any experiences to share related to Zero Loss Formula, Kuantum Kod, Push Money App or the newly released Brexit Bot.