В останні тижні ми отримали скарги на бінарних 5 лохотрон, мабуть, штовхатимуть двома шахраї, one of them is William Griffin and the other – who is the owner of binarytoday.com – John Kane. These two characters have one thing in common: they’re both fictitious. The name John Kane had apparently been used by the same bunch of scammers before, to promote Binary Ascent – another similar scam. Насправді, Kane was responsible for various other scammy trading systems over the years. He’s obviously never showed his face, which is probably why the scammers have deemed the name to be highly reusable.

The site where they’re currently peddling Binary 5, binarytoday5.com, looks rather bare-bones these days. По суті, the only page where any sort of information is provided is their home page, where all sorts of bold claims are made. The people behind the scam – who seem to be the same bunch who operate binarytoday.com, and a number of other similar operations – have apparently realized that selling their indicator-based signal generator is better done this way. The usual scam-cocktail of videos, preposterous claims, free software and affiliate-commission based earnings, seems to have run its race. 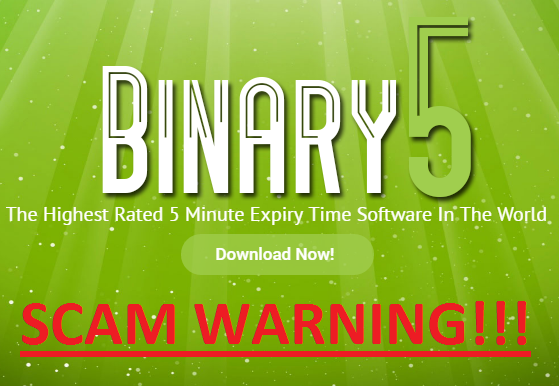 What exactly is Binary 5 though? By the looks of things, Двійкові 5 is a sort of personal signal generator, based on a combination of technical indicators. They do actually admit this on their homepage, but they try to instill an air of mystery to the whole thing, to make it seem like there’s much more to it behind the scenes. That is just not the case though. The reason why it’s called Binary 5 is that it’s apparently dedicated to the trading of 5-minute options.

The indicator-package that the Binary 5 people are selling, is nothing more than a bunch of indicators built onto the Meta Trader 4 chart-analysis platform. Many people have been using this platform and the indicators for trading over the years, and that’s obviously OK. What’s not Ok though is that these people have gift-wrapped a bunch of widely available indicators and they’re selling it for $179.99, або $329.99. The first package is for 1 license, while the second covers 2 licenses. None of this stuff really works though. Given that the “system” is in fact based on actual indicators, under the right circumstances, it may spit out a good trading signal every now and then, and by that standard it might be said that it’s working. It won’t do 25 trades a day though and hit ITM rates of 81% and up. That’s where the scam is. Також, it will not generate anyone $1,000 в день.

В 4 indicators allegedly used in Binary 5 are the Stochastic Oscillator, the RSI (Relative Strength Index), the CCI (Trend Commodity Channel Index and the Entry CCI. While there do indeed seem to be some moving averages on the charts in Binary 5, there’s no actual proof that the said indicators are indeed being used. Крім того, the resulting signals lack quite a few essential bits…probably left out on purpose, to provide space for washing hands over the whole deal.

The sneaky nature of the system is further reinforced by the fact that it only provides trading signals. The actual application of these signals is left to the traders, which provides the scammers with a great escape-hatch whenever confronted. They can just blame traders for poor signal application.

The community has long delivered its verdict on Binary 5. All one will find about it out there are scam reviews and general social media vitriol and ridicule. Mind you, the positive reviews, testimonials and verified results that you will find about it, are all published by various sites of the same scammers. These sites are made to look like 3rd party, independent entities. The bottom line is that Binary 5 is a shill service, which delivers low-quality trading signals of dubious origin, while failing to provide any solid proof of anything really. There are free services out there that are far better than this scam.