Грошові лазівка-це новий Бінарні опціони Автотрейдінг (чи це радше сигнал-сервіс?) лохотрон, which – in certain ways – improves on the “classic” scam blueprint. На жаль, in other ways, it falls deplorably short and thus ends up flatter than Richard Sellars’ wife’s Yorkshire Pudding. By the time we’re finished with this review, you’ll be confident that your money is not safe with TheCashLoophole.co, the “Exclusive Invite” fraud. 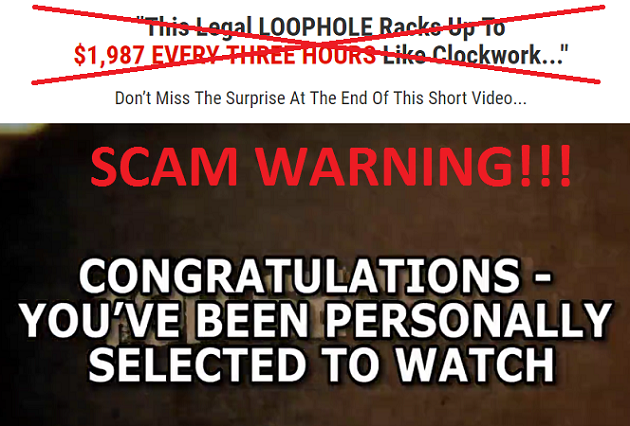 So what exactly is “innovative” about Sellars’ Cash Loophole scam? We did mention something about that in the beginning of this review. Ну, first of all, they’ve pulled this never-before-seen trick with their website. On their homepage, they have a message proclaiming that the whole Cash Loophole system has run its course and that it’s no longer available. On one of their internal pages though, everything is available in its full “splendor”. This is quite a bold way of inducing urgency in their would-be victims. Також, the actual concept on which the Cash Loophole system is based, is new and quite a breath of fresh air compared to faster-than-light trading systems and various other far-fetched concepts such scams usually make use of. Sellars claims that his auto trader takes advantage of the abusive price-manipulations of less-than-honest binary option brokers. It is through these manipulations that it finds its loopholes to generate profit. While this colossal lie is indeed based on a sprinkle of truth, it is of course still just a big fat one. Sellars conveniently fails to mention that trading with rogue brokers isn’t just hazardous on account of those manipulations. Every one of these brokers has made a habit of not paying out anything…What is the use of racking up tremendous profits (even just theoretically) at such a broker? This isn’t a problem the Cash Loophole system will have to deal with though, because it will never rack up any such profits.

This is where the originality runs dry in the Cash Loophole presentation. Other than these few twists, we’re met with a hail of contradictions, ridiculous claims and hilariously bad voice-acting. Звичайно, we’re not spared the tear-jerking, rags-to-riches story either, which is so transparently made-up in this instance, it fails to entertain on the most basic level. Sellars has apparently been betrayed and robbed by his brother, who drove their once-profitable (but otherwise fictitious) catering business into bankruptcy. He then worked a regular, low paying job as a chef in an Italian restaurant, which is where he met his future partner, Kevin, who was already stinking rich off binary options at that point. He developed the TheCashLoophole.co website with this partner, and they planned to release it on Січня 3, 2017, для $1,000 per license. Очевидно, this is just another one of those traditionally awful urgency-inducing mechanisms. Development allegedly cost them some $300k and it took two years. Interestingly though, some of the “results” displayed in the video, date back to 2014.

Who is this Richard Sellars character really though? A fictitious persona obviously, one that has no anchors to real life whatsoever. He’s a hired voice-actor, who – together with a menagerie of a couple more such actors – has been tasked with pushing this scam down our throats. He stages a hilariously sloppy live test for his software at one point, which succeeds in making two things clear: everyone, everywhere in the world will instantly answer a Skype call. Також, the actress voicing the “German woman” character has some way to go before developing a more credible German accent. Нижня лінія, stay away from this scam!